News: Are Attacks On Christians In Nigeria On The Rise? - BBC 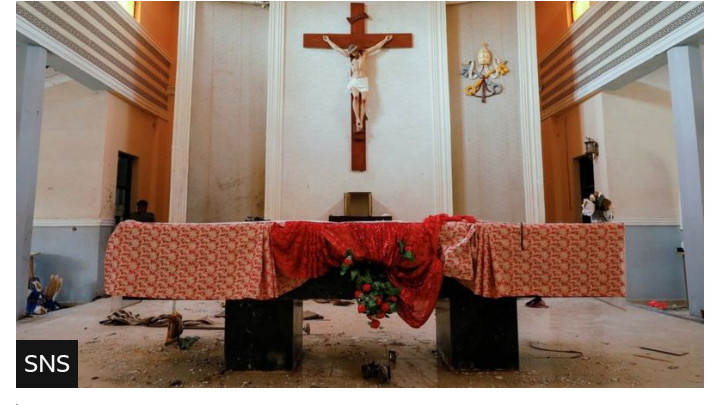 The recent killing of dozens worshippers at a Catholic church in south-western Nigeria has reignited concern about religious violence in the country.

The Christian Association of Nigeria (CAN), an umbrella group representing church groups, says attacks on churches and Christians have been increasing sharply.

"It is becoming a hopeless situation and is reprehensible," says CAN spokesman Adebayo Oladeji.

HOW MANY ATTACKS?
There has been a clear rise in recorded incidents targeting Christians since 2019.

According to data collected by the Armed Conflict Location and Event Data Project (ACLED), there have already been 23 separate attacks on church premises and people linked to them so far this year. For the whole of 2021 there were 31, and in 2020 there were 18.

A series of high-profile incidents this year has drawn particular attention to the issue.

-Two Catholic priests were abducted in Katsina state on 25 May

A decade ago, recorded attacks against Christian targets were also very high, with 46 in 2012 going by ACLED data.

In April that year, gunmen killed at least 15 people in a university theatre being used by Christian worshippers in the northern city of Kano. And later in 2012, at least 19 people died in an attack on a church in central Nigeria.

During this period, many of the attacks were carried out by the militant Islamist group, Boko Haram.

The data collected by ACLED relies on local groups and media reports, and many incidents may well go unrecorded. It's also difficult to find out how many people have died in targeted attacks against Christians.

However, the recent rise in incidents involving Christians, says ACLED, should also be seen in the context of a general upturn in violence against all civilians - irrespective of their religious affiliation - in Nigeria since 2020.

Some attacks have been by Islamist groups such as Boko Haram against those Muslim communities seen as not observing their strict interpretation of Islam.

Schools educating Muslim girls, for example, have been attacked and the children kidnapped. Muslim leaders who have spoken out against these militant groups have also been targeted.

In terms of kidnappings and forced disappearances in Nigeria, the main targets have been political figures and women, according to ACLED data for the period from 2018 up to the end of April 2021.

WHO IS CARRYING OUT THE RECENT ATTACKS?
The latest attack on a church in Ondo state is suspected by the Nigerian authorities to have been carried out by a militant group linked to the Islamic State network.

While Islamic militants have attacked Christian targets over many years, others have been carried out by vigilante mobs, or bandits not affiliated with any particular group, who have stolen livestock or property.

The situation is also complicated by the ongoing conflict between herders and farmers for resources such as land.

Drought and desertification have degraded pastures and led to the drying-up of water sources in the north. Muslim herders have had to migrate south, where they create conflicts with Christian farming communities.

In these clashes, both Christian and Muslim communities have been targeted, with homes and places of worship destroyed.

WHAT HAS THE GOVERNMENT SAID?
President Muhammadu Buhari has previously blamed the attacks on those intent on creating political instability, and fostering divisions between Nigerians on the basis or religion.

Nigeria's police chief, Usman Alkali Baba, has ordered a full-scale investigation to track down the perpetrators of the most recent attack in Owo state.

Christian groups in Nigeria have blamed government policies for exacerbating the situation.

Religious leaders have called on security agencies to pursue those who carried out the recent attack
Mr Oladeji of the Christian Association of Nigeria (CAN) says he believes the continuing attacks on Christian targets show that "deradicalisation" programmes under which repentant Islamists are helped to reintegrate into the community have not worked.

And some religious leaders have said there should be more dialogue between people of different faiths, and have urged the government to bring in legislation on promoting religious tolerance and tackling hate speech.