Less More
2 months 3 days ago #12783 by lighteousness
Psalm 67 sets to hold Lolade Adeleke, Babatunmise, Ayomiku Alabi, others at Opomulero Concert was created by lighteousness
It is a new dawn and season for energetic Nigerian gospel artiste and singer, Oluwaseun Adekunle popularly referred to as Psalm 67as he is set to host the maiden edition of his concert themed "Opomulero" in Abeokuta, Ogun State. 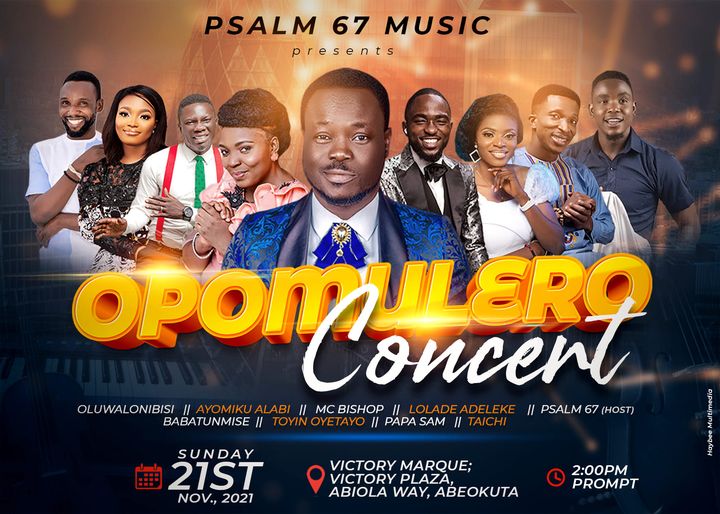 The singer who has been in the music industry for close to two decades will be having his first concert on November 21st, 2021 and will be ministering on stage alongside worship leader and Crystal Sound director Oluwatoyin Oyetayo, O Deep Gan crooner Lolade Adeleke, producer and singer Papa Sam, Oluwalonibisi and Ibadan based praise machine and OAP Babatunmise.

There will also be the presence of comedians, MC Bishop and Taichi who will also be gracing the concert which is themed after Psalm 67's last released album. Other ministers set for the event include fast growing indigenous gospel singer, Mayowa Dynamics, Demola Praise, renowned dance group Crystollite and DareDrummerGod.

"Opomulero" which is interpreted PILLAR is a name birth from several experiences and numerous testimonies of Psalm 67's close to two decades journey of being in the music industry.

Psalm 67 has been one of the phenomenal gospel artistes in the country with several hit singles and albums including New Thing (2010), Oore (2013), Ope (2018) and Opomulero (2020). The singer remains one of the standout ministers in the South Western region of Nigeria and has ministered on the same stage alongside the likes of Akpororo, Kenny Blaq, Bukola Bekes, Sammy Okposo and many others. He has also ministered in several countries outside Nigeria including Togo, SouthAfrica, Ghana among many others countries in Africa.