× FAQs on GospelNaija! (Frequently Asked Questions on GospelNaija!), is an Online Internship initiative for members of the GospelNaija community where certified and celebrated experts across various industries mentor the next generation about tips and tricks of their respective trades. 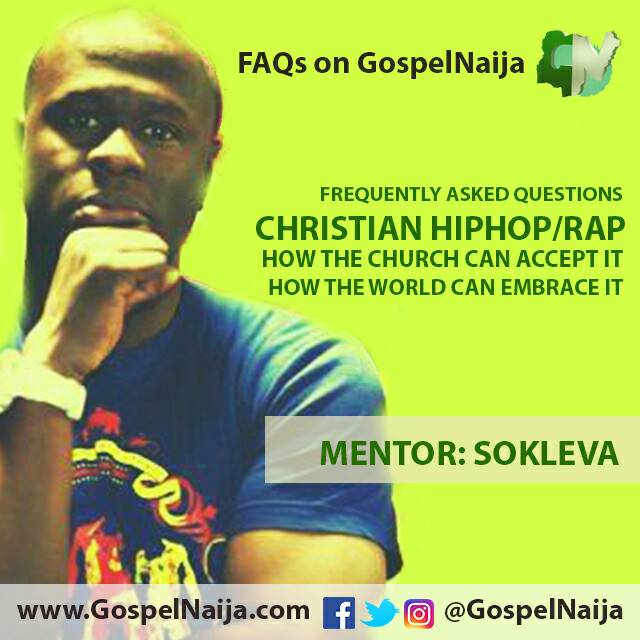 On this edition, we have the legendary Sokleva, member of the foremost rap duo in Nigeria - The Rooftop MCs, who rocked the airwaves and stages across and beyond Africa in the 2000s and are still doing relevant music today, either individually, or as a crew - Rooftop Clan, or being a "Rapperprenuer" at Riverbank Music, or collaborating with younger artistes to grow the Christian Hip-hop/Rap scene in Nigeria. Shobowale Hughes, aka Sokleva, is someone we can certainly say has "been there, done there". Scratch that! He's still there and mos-def still doing that!

Sokleva would be doing the honours of being our mentor for this edition of FAQs on GospelNaija and the topic is:

CHRISTIAN HIP-HOP/RAP:
HOW THE CHURCH CAN ACCEPT IT
HOW THE WORLD CAN EMBRACE IT

Rules:
i) To post a question or interact in the discussion, you must first be registered on the site. Kindly register at www.gospelnaija.com/join
ii) Follow this link to view the discussion and post your questions and contributions: bit.ly/2jg4jdy
iii) Please the civil in your interactions and do not derail the discussion.

Let me start with this Prologue:

Many would argue that the field/harvest for a Gospel Rapper (or a rapper who is a Christian - so we don't offend anybody) isn't for the church but the streets. They claim that Hip-Hop/Rap itself didn't grow on any formal/organizational structure like other genres, it was founded on the streets and grew in the same streets, so they feel the same should apply to the CHH. But then, I would say all "Gospel" should be for the world and not the church, else it would just be like preaching to the choir.
However, it is obvious CHH hasn't gotten the needed support from the church like other genres. I stand to be corrected, but I have observed that CHH came to the church in Nigeria before Rock music did. In other words, there were Christian rappers before the advent of Christian Rock artistes in Nigeria. The likes of Rooftop MCs and BOUQUI emerged way before the likes of Eben and Frank Edwards, but it is obvious that the latter has received more support and platform from the church than the former.

Does it mean the church has a problem with CHH? Or they don't understand it? Or the artistes aren't presenting or representing it well? Or it isn't marketable?

Over to you Klev, as someone who has had radio hits, club bangers, street cred, church cred and even been on the biggest stage in Africa - The Experience (I doubt any other rapper in Nigeria has matched this), with this same CHH, how would you respond to the prologue above?